Totalitarianism is a word.   Definition: Form of government that subordinates all aspects of its citizens’ lives to the authority of the state.

The reality of  Totalitarianism is made clear by three people who lived it, in North Korean slave prisons.  Two as prison guards and one as the lone slave escapee of Camp 14. They give us first hand accounts, on video, of what it is really like.

Shin Dong-hyuk was born into Camp 14 as a slave.  He is the only person to ever escape it alive.  Marc Wiese’s film. Camp 14: Total Control Zone is a documentary about Shin’s escape and the camp system.

Hoping to start the film with an upbeat story, he asked him for a memory from when he was four. “So he told me, ‘I have a memory; it was a public execution.’ I said, ‘Did your mother talk to you about that? Did she try to help you?’ He looked at me and was shaking his head, and he said, ‘No. For what? It was happening every week.’ And just for me, personally, I said, ‘Shin, what did your mother teach you?’ and he said, ‘Only one thing: how to survive.'”

Survival meant living by the rules, which included informing on anyone in breach of camp regulations. When Shin overhead his mother apparently plotting to help his brother escape, he told his teacher. Later, he had to watch as his mother was publicly hanged and his brother killed by firing squad. He felt nothing. If he hadn’t informed, he and his father would probably have been executed, he says. This revelation takes Camp 14: Total Control Zone into the area of Primo Levi’s “grey zone”, where the distinction between victim and perpetrator becomes disturbingly blurred. “For me, this was never a victim story,” says Wiese. “That would be, honestly, boring. Camp 14 is, for me, a film which is showing how a system is able to condition three people. In the beginning, Shin and the two guards are very opposite. But in the middle, as he is talking about his mother’s execution and they are talking about torture, they are very parallel. Shin is saying, ‘Well, she did something wrong.’ And the perpetrators are saying, ‘Well, of course we tortured. Of course we executed. They told us we have to, so we did.'” 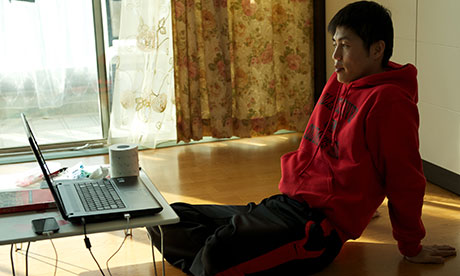 ‘It’s happening right now, in this moment’ … Shin Dong-Hyuk in the film.

Able to act with impunity, the guards beat, killed and raped prisoners on a whim. While Oh Yang-nam, a former secret service policeman also interviewed for the film, questions what he did, Hyuk Kwon, a former commander in camp 22, shows no remorse. “I’m convinced he has a sadistic side, because he’s smiling,” says Wiese. “He’s talking about rape. It’s impossible to smile. Around 50% of the material with him was simply not usable. It was too tough. It made a freak show out of Camp 14.” Still, it may yet serve a purpose: “If ever a human rights court is established for North Korea, they can have my raw material, and it’s enough to sentence them both.”   http://www.theguardian.com/film/2013/sep/19/north-korea-prison-camp-14-documentary

Here is a trailer for the film:

The lone escapee Shin Dong-hyuk has becomes friends, to an extent, with another prison guard Ahn Myung-chul.  The prison guards, just like Shin, risked their lives to escape North Korea.

Shin Dong-hyuk and Ahn Myung-chul are unlikely collaborators. They’re both North Korean, both defectors and have both lived in gulags – but that’s where the similarities end. Shin was a political prisoner while Ahn was one of the notoriously heavy-handed guards.

“I had the authority to kill prisoners like him if they tried to escape,” Ahn said, referring to Shin. “We couldn’t have sat together like this in North Korea, but fortunately we’ve come to a free country where this is possible.”

The pair appeared together in Seoul at the weekend to speak about their life in North Korea, one of the world’s most repressive societies, and draw attention to plight of prisoners in the country’s political camps.

Shin described his first meeting with Ahn in 2008 as having been fraught with tension, as the guard brought back memories of the psychological and physical torture he suffered at Camp 14.

“When we first met, I couldn’t even look at him directly. I kept my head down because I still had images in my mind of guards pointing guns, yelling and treating prisoners really poorly,” he said.

The North Korean system extends punishment to three generations of a family; Shin was doomed to live his whole life in a prison camp for having an uncle who escaped to South Korea in the 1950s. Camp 14, where he grew up, is referred to as a “total control zone” – meaning that the prisoners are never to be released.  http://www.theguardian.com/world/2014/aug/05/north-korean-prisoner-gulag-guard

In this video prison guard Ahn Myung-chul tells his story to a Human Rights Group, hoping it will help bring an end to the horrific prison system of North Korea.