Current weather is normal; that is, it is well within the range of all previous weather and climate variations. There are no dramatic increases in temperature, precipitation, hurricanes, tornadoes, or any other severe weather. The climate is changing just as it always has and always will and the rate of change is perfectly normal. Of course, that is not what the government, environmentalists, or the media promote and as a result most of the public believe. The misconception is deliberate and central to the exploitation of global warming and climate change as the vehicle for a political agenda.

One phenomenon that creates the illusion weather is abnormal is the attention given by the media. We all experience being introduced to a person then seeing them pop up every time we turn around. It’s the same thing with cars after you buy one you see them everywhere. In both cases they were always there, but not part of your awareness. Weather and climate events seem to occur everyday, but it is because they became a media story. They always occurred. Now the story appears and is amplified by the sensationalism of the media with their “Extreme Weather Reports.”

The entire objective of those pursuing the political agenda was to create the illusion that current weather is abnormal and therefore unnatural. They wanted to show that all this occurred in the last 100 years as a result of human industrial activity. The objective was to create false science, which was easy because few people know about weather and climate, a fact confirmed by a Yale University study that created a High School exam. Figure 1 shows the raw results with 52 percent getting an F and 25 percent a D for a total failure of 77 percent. 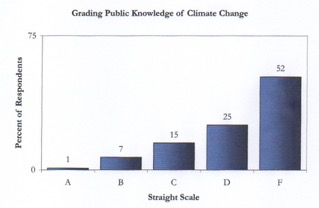 Promoters of the false story also knew people know even less about climate. Indeed, most don’t even know the difference between weather and climate. Weather is the atmospheric conditions you experience at any point in time. The climate is the average of those conditions in a region or over time.

A few years ago I wrote, but didn’t submit, a story for the Globe and Mail with the headline, “An Area of Arctic Ice Twice the Size of Vancouver Island Melted today.” The story then revealed that this was a normal amount of melt. Imagine my surprise when recently it appeared in reality! The headline I tongue-in-cheek considered writing was in a national newspaper:

Melting in the Arctic reached an all-time high in June: Ice has been disappearing at a rate of 29,000 square miles a day.

This is near the average daily rate of melt in the brief Arctic summer, but few people know this is natural. Approximately 10 million km2 of ice melts every summer in approximately 145 days, which is a melt rate of 68,965 km2 (26,627 square miles) per day. The amount mentioned is well within the wide variation in melt from year to year.

Figure 2 provides a brief context to show the wider natural range of temperature over the last 10,000 years. It shows the temperature of the Northern Hemisphere derived from Greenland ice cores. 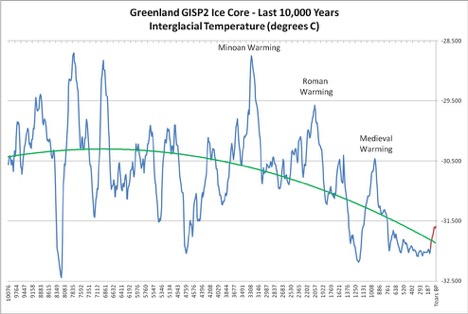 The current temperature is on the right (red line). Some salient points that expose the lies and distortions;

* The world was warmer than today for 97 percent of the last 10,000 years, a period known variously as the Climatic Optimum, or more recently the Holocene Optimum. We have known about this warmer period for at least 75 years.

* The world was 2°C warmer than today 1000 years ago during the Medieval warming. Remember, you are told that the world is going to warm by 2°C, and that is catastrophic.

* The world was 4°C warmer than today during the Minoan warming.