After reading the beginning of Murray’s article, was disappointed. He is one of America’s greatest and bravest minds.  He helped promote the “Broken Windows” policing policy in in NYC that has saved literally thousands of people there from murder.

After reading further found he still is that amazing non-conformist mind.  He provides crucial information in this article that is being censored in America.   The chart you see is the tip of the iceberg in terms of what is being hidden from the American people about the true state of Americans who are not part of the elite rich.  Both poor and middle income people.

Did you know that white working-class men in their 30s and 40s—what should be the prime decades for working and raising a family—participation in the labor force dropped from 96% in 1968 to 79% in 2015? That means that young White men are 5 times more likely to be unemployed today than in 1968.  5 times! And they are more than 3 times more likely to be un-married too!

Please help end the censorship and pass the this article on to others.

There’s nothing irrational about Donald Trump’s appeal to the white working class, writes Charles Murray: they have every reason to be angry

If you are dismayed by Trumpism, don’t kid yourself that it will fade away if Donald Trump fails to win the Republican nomination. Trumpism is an expression of the legitimate anger that many Americans feel about the course that the country has taken, and its appearance was predictable. It is the endgame of a process that has been going on for a half-century: America’s divestment of its historic national identity.

For the eminent political scientist Samuel Huntington, writing in his last book, “Who Are We?” (2004), two components of that national identity stand out. One is our Anglo-Protestant heritage, which has inevitably faded in an America that is now home to many cultural and religious traditions. The other is the very idea of America, something unique to us. As the historian Richard Hofstadter once said, “It has been our fate as a nation not to have ideologies but to be one.”

What does this ideology—Huntington called it the “American creed”—consist of? Its three core values may be summarized as egalitarianism, liberty and individualism. From these flow other familiar aspects of the national creed that observers have long identified: equality before the law, equality of opportunity, freedom of speech and association, self-reliance, limited government, free-market economics, decentralized and devolved political authority.

As recently as 1960, the creed was our national consensus. Running that year for the Democratic nomination, candidates like John F. Kennedy, Lyndon B. Johnson and Hubert Humphrey genuinely embraced the creed, differing from Republicans only in how its elements should be realized.

Today, the creed has lost its authority and its substance. What happened? Many of the dynamics of the reversal can be found in developments across the whole of American society: in the emergence of a new upper class and a new lower class, and in the plight of the working class caught in between.

In my 2012 book “Coming Apart,” I discussed these new classes at length. The new upper class consists of the people who shape the country’s economy, politics and culture. The new lower class consists of people who have dropped out of some of the most basic institutions of American civic culture, especially work and marriage. Both of these new classes have repudiated the American creed in practice, whatever lip service they may still pay to it. Trumpism is the voice of a beleaguered working class telling us that it too is falling away. 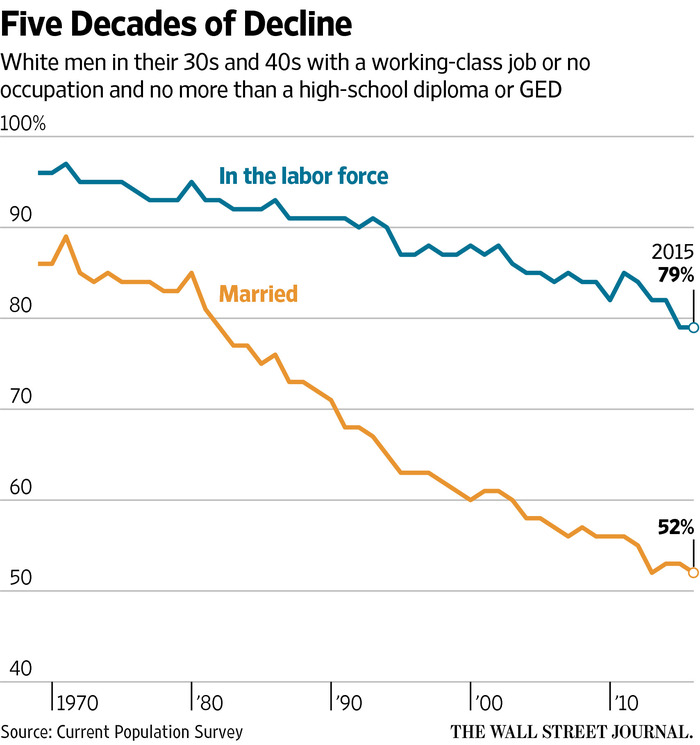 Historically, one of the most widely acknowledged aspects of American exceptionalism was our lack of class consciousness. Even Marx and Engels recognized it. This was egalitarianism American style. Yes, America had rich people and poor people, but that didn’t mean that the rich were better than anyone else.

Successful Americans stubbornly refused to accept the mantle of an upper class, typically presenting themselves to their fellow countrymen as regular guys. And they usually were, in the sense that most of them had grown up in modest circumstances, or even in poverty, and carried the habits and standards of their youths into their successful later lives.

America also retained a high degree of social and cultural heterogeneity in its communities. Tocqueville wrote of America in the 1830s as a place where “the more opulent citizens take great care not to stand aloof from the people.” That continued well into the 20th century, even in America’s elite neighborhoods. In the 1960 census, the median income along Philadelphia’s Main Line was just $90,000 in today’s dollars. In Boston’s Brookline, it was $75,000; on New York’s Upper East Side, just $60,000. At a typical dinner party in those neighborhoods, many guests would have had no more than a high-school diploma.

In the years since, the new upper class has evolved a distinctive culture. For a half-century, America’s elite universities have drawn the most talented people from all over the country, socialized them and often married them off to each other. Brains have become radically more valuable in the marketplace. In 2016, a dinner party in those same elite neighborhoods consists almost wholly of people with college degrees, even advanced degrees. They are much more uniformly affluent. The current median family incomes for the Main Line, Brookline and the Upper East Side are about $150,000, $151,000 and $203,000, respectively.  Read More:  http://www.wsj.com/article_email/donald-trumps-america-1455290458-lMyQjAxMTE2MDE5MzYxMzMwWj

Two charts not in that article but relevant are these two.  Again a massive change has taken place unlike anything in prior 200 years, and it is being hidden from us. We have had high immigration before (1900-1910), but from Europe, not the massive non-European immigration since 1970 which coincides with declining jobs and wages overall for all Americans.