CARACAS, Venezuela –  Venezuela’s opposition won control of the National Assembly by a landslide, trouncing the ruling party and altering the balance of power after almost 17 years of socialist rule.

The opposition coalition won at least 99 seats in the incoming 167-seat legislature, electoral authorities announced after midnight Sunday. The ruling socialist party won 46 seats. The 19 remaining races remain up for grabs, but if enough are won by the opposition it could give the coalition a two-thirds supermajority needed to strongly challenge President Nicolas Maduro’s grip on power.

The streets of the Venezuelan capital of Caracas broke out in shouts of joy, fireworks and car honks after National Electoral Council President Tibisay Lucena announced the partial results six hours after polls closed. In the plaza in wealthy eastern Caracas that was the epicenter of last year’s bloody anti-government protests, a small group of opponents, some of them sipping champagne, burned red shirts that are the obligatory revolutionary attire.

Within seconds, Maduro recognized the opposition’s win, saying that despite an adverse result Venezuela’s democracy had triumphed. But he recalled the long history of U.S.-supported coups in Latin America in blaming the “circumstantial” loss on a conservative “counter revolution” trying to sabotage the oil-dependent economy and destabilize his rule.

“I can say today that the economic war has triumphed,” Maduro, surrounded by his party’s top leadership, said from the presidential palace.

Opposition leaders meanwhile spoke in strident terms, a prelude to what’s likely to be a period of intense political fighting in a deeply polarized country mired in an economic crisis. Voter turnout was a stunning 74 percent, near levels normally seen in presidential voting, as Venezuelans punished Maduro’s government for widespread shortages, a plunging currency and triple-digit inflation that has brought the economy to the edge of collapse.  Read More: http://www.foxnews.com/world/2015/12/07/venezuela-opposition-claims-victory-in-legislative-elections/ 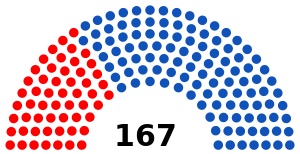 The country is in taters after 17 years of Marxism and semi dictatorial rule, as has happened every other time Marxism has been tried.   Can the country recover?

Probably only if they kill off the Marxist policies in place.  Why did it take this long before the results of Marxism were rejected?  A good question.