Craig Spenser age 33, a doctor who has been working with Doctor’s Without Borders in West Africa is the first confirmed case of Ebola in New York City. He, apparently, has been walking around New York City for six days before he was hospitalized. He has been reporting since Tuesday that he wasn’t feeling well. Perhaps it would be responsible for any healthcare worker coming back from treating Ebola patients in West Africa to impose a 21 day quarantine on themselves.  There are apparently four people with whom he has had close contact who are now being monitored for the disease.

The Daily News reports that the 33-year-old returned from Africa 10 days ago—well within the standard 21-day period in which symptoms would typically appear—and was “roaming around town” before falling ill. He reportedly went bowling in Brooklyn last night, rode the subway, and used taxis run by the service Uber.

The first confirmed case in America’s largest city set off renewed fears about the spread of the virus, which has killed nearly 4,900 people, largely in Liberia, Sierra Leone and Guinea. New York (CNN) — A Doctors Without Borders physician who recently returned to New York from West Africa has tested positive for the Ebola virus, becoming the first diagnosed case in the city, a law enforcement official briefed on the matter told CNN.

The doctor, identified as Craig Spencer, 33, came back from West Africa about 10 days ago, and developed a fever, nausea, pain and fatigue Wednesday night.

The physician, employed at New York’s Columbia Presbyterian Hospital, has been in isolation at Bellevue Hospital in Manhattan since Thursday morning, the official said.

On his Facebook page, Spencer posted a photo of himself in protective gear. The page indicates he went to Guinea around September 18 and later to Brussels in mid October.

A specially trained team wearing protective gear transported Spencer to Bellevue Hospital from his Manhattan apartment, the city said in a statement.

The first person diagnosed with Ebola on U.S. soil, Thomas Eric Duncan, flew from Liberia to Texas and later died in a Dallas hospital.  Two of the nurses who treated him became infected with the Ebola virus both of whom are recovering one at Emory Hospital in Georgia and  the other at The Nebraska Medical Center.  On Tuesday it was announced that Nina Pham had been upgraded to “good condition” and on Wednesday Amber Vinson was reported to be “Ebola free” at Emery University Hospital. 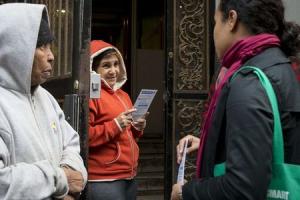 Members of the New York City Department of Health speak to neighbors of the Health Care worker now confirmed to have Ebola.

Spencer’s Facebook page, which included a photo of him clad in protective gear, said he went to Guinea around Sept. 18 and then flew to Brussels on Oct. 16.

He has specialized in international emergency medicine at Columbia University-New York Presbyterian Hospital in New York City since 2011, according to his profile on the LinkedIn career website.

Columbia in a statement said he has not been to work nor seen any patients since his return.