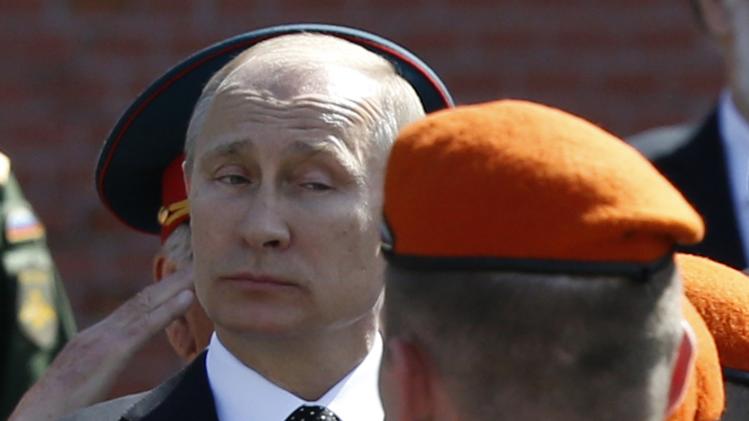 Complicating the West’s efforts to isolate Russia, the Kremlin announced Thursday that Vladimir Putin will join President Barack Obama and European leaders in France next month for a ceremony marking the 70th anniversary of the D-Day invasion that hastened the end of World War II.

The June 6 commemoration would mark the first time Putin and Western leaders have come face-to-face since the outbreak of the crisis in Ukraine. The U.S. and Europe have condemned Russia’s provocations, ordering sanctions on Putin’s inner circle and cutting Russia’s ties to some international organizations.

Raif Badawi, who started the “Free Saudi Liberals” website, was arrested in June 2012 and charged with cyber-crime and disobeying his father – a crime in the Arab state, local media has reported.

His website included articles that were critical of senior religious figures such as Saudi Arabia’s Grand Mufti and allegedly insulted Islam and religious authorities, according to Human Rights Watch.

Bulldozers cleared rubble Friday from the streets of battle-scarred districts in the central Syrian city of Homs after government troops entered the last rebel-held neighborhoods as part of an agreement that also granted opposition fighters safe exit from the city.

The government quickly forged ahead even as another aspect of the negotiated deal hung in the balance. The departure of a last batch of some 300 fighters waiting to leave for rebel-held areas north of Homs had been delayed after opposition fighters in northern Syrian prevented aid from reaching besieged pro-government villages.

US Unwilling to List Boko Haram as a Terror Group

The Obama administration was afraid to label Boko Haram a terrorist organization in 2012 because of concerns that it would result in the Islamic extremists becoming more powerful and more dangerous, U.S. officials told The Washington Times.

Sources told the newspaper that the government was reluctant to add the Nigerian-based group to its terror list over fears that it would enhance its reputation internationally, and therefore be able to recruit more members and carry out even more inhumane acts.

Now Boko Haram has exploded onto the world stage by kidnapping more than 300 Nigerian schoolgirls with plans to possibly sell them off as slaves in the name of Islam – and even al-Qaida appears to be horrified by the abductions.

Syria must destroy all the facilities used to create chemical weapons in order to comply with international agreements, a top U.S. official said Friday.

The country has already prepared about 92 percent of its chemical weapons to be shipped out of the country. But Rose Gottemoeller, the State Department’s top arms control official, said destroying the last eight percent won’t be enough. Gottemoeller said the Syria must also destroy all relevent facilities, including hangars and tunnels, the Associated Press reports.

Boko Haram and the Kidnapped Schoolgirls The Nigerian terror group reflects the general Islamist hatred of women’s rights. When will the West wake up? Since the kidnapping of 276 schoolgirls in Nigeria last month, the meaning of Boko Haram—the name used by the terrorist group that seized the girls—has become more widely known. The translation from the Hausa language is usually given in English-language media as “Western Education Is Forbidden,” though “Non-Muslim Teaching Is Forbidden” might be more accurate. But little attention has been paid to the group’s formal Arabic name: Jam’at Ahl as-Sunnah lid-da’wa wal-Jihad. That roughly translates as “The Fellowship of the People of the Tradition for Preaching and Holy War.” That’s a lot less catchy than Boko Haram but significantly more revealing about the group and its mission. Far from being an aberration among Islamist terror groups, as some observers suggest, Boko Haram in its goals and methods is in fact all too representative.