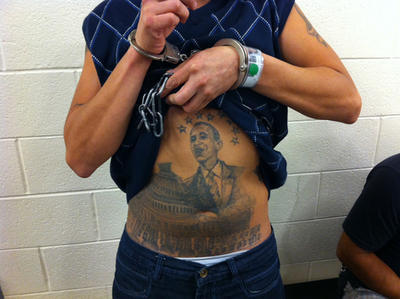 President Barack Obama’s new homeland security secretary is offering his first public hints at executive action the administration might take on immigration, suggesting changes to a much-criticized program that runs the names of people booked for local crimes through a federal immigration database.

But advocates who have pushed Obama for bold action with immigration legislation stalled in Congress wasted no time in declaring that such steps wouldn’t go far enough.

Valerie Jarrett: ‘We Have a Commitment’ from Boehner on Amnesty

President Barack Obama’s top adviser and confidant told a group of global elites on Thursday in Las Vegas, Nevada that House Speaker John Boehner (R-OH) has made a commitment to the White House to try to pass amnesty legislation this year.

After hailing the Senate’s amnesty bill that the Congressional Budget Office determined would lower the wages of American workers, Valerie Jarrett, Obama’s senior advisor, told attendees at the yearly invitation-only SkyBridge Alternatives Conference that Boehner would help the White House make a push get immigration reform enacted in the next three months.

“I think we have a window this summer, between now and August, to get something done,” Jarrett said, according to the Las Vegas Review-Journal. “We have a commitment from Speaker Boehner, who’s very frustrated with his caucus.”

Obama Makes It Clear That Amnesty Will Help Democrats

Immigration: After releasing tens of thousands of criminal aliens, President Obama urgently asks law enforcement officials to lean on Republicans to pass amnesty. Will the GOP deport itself out of victory this year?

Congressman Lamar Smith called it “the worst prison break in American history, except it was sanctioned by the president and perpetrated by our own immigration officials.”

According to a document obtained from the Center for Immigration Studies, Immigration and Customs Enforcement released 36,007 convicted aliens last year who were being detained pending deportation. The tally includes 193 convictions for homicide, 426 for sexual assault, 303 for kidnapping, 1,075 for aggravated assault and 16,070 for drunk or drugged driving.

Donald Sterling and his antitrust lawyer Maxwell M. Blecher have sent a letter to the NBA threatening to sue the league, while also refusing to pay the NBA’s $2.5 million fine for his recent racist comments.

The letter, first reported by Sports Illustrated and USA Today, claims that Sterling did nothing wrong and that “no punishment is warranted.” Sterling’s lawyer contends that the 80 year-old’s “due process rights” were violated when he was permanently banned after a brief four-day investigation. Blecher also insists Sterling did not violate any article of the NBA constitution.

NBA Commissioner Adam Silver fined Sterling $2.5 million on April 29 and issued him a lifetime ban for the remarks, which were secretly recorded by his mistress and released on TMZ’s website last month.

McCain: ‘People Should be Going to Jail’ in VA Scandal

Sen. John McCain says it matters whether Veterans Affairs Secretary Eric Shinseki resigns over the waiting list scandal, but, he adds, there is a bigger issue.

“If these allegations are true people should be going to jail, not just resigning their positions,” the Arizona Republican said Thursday on Fox News Channel’s “On the Record with Greta Van Susteren.”

Shinseki is under fire because of multiple allegations across the country of VA hospitals creating off-the-books waiting lists for veterans to hide the fact that doctors weren’t seeing patients for weeks or months past the 14-day guideline.

Republican Sens. Lindsey Graham and Kelly Ayotte charged Thursday that National Security Adviser Susan Rice’s initial account of the 2012 Benghazi attacks has “totally collapsed” in light of new scrutiny of her comments about the level of security at the U.S. compound where four Americans were killed.

“She’s frustrated this won’t go away,” Graham, of South Carolina, said at on Capitol Hill, Fox News reports. “She’s frustrated that she appeared on national television and told a story about Benghazi that has absolutely collapsed.”

Besides falsely linking the attacks to protests over an anti-Muslim video, Rice also wrongly said the United States “obviously did have a strong security presence” at the consulate as it was being attacked by the hardline Islamist group Ansar al-Sharia.


Posted by Geoff
Tagged with