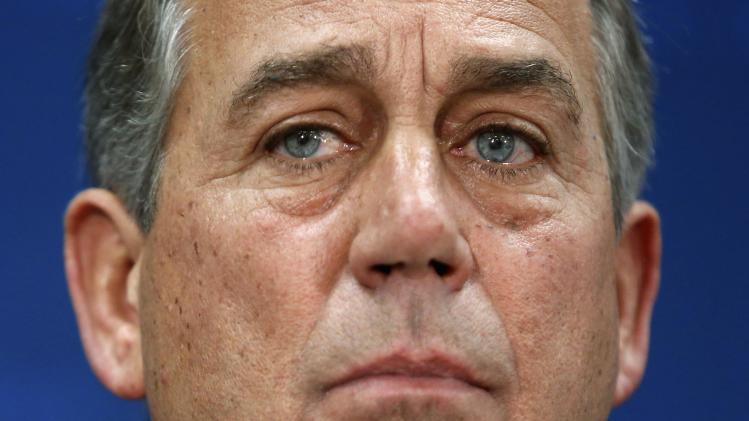 It’s up to Speaker John Boehner. Republican and Democratic advocates see one final, long-shot chance to pass immigration reform this summer, and its fate rests with a Speaker stuck between his party’s resistance and his search for a career-defining legacy. House lawmakers writing immigration proposals say Republican leaders haven’t told them if they plan to hold a vote on immigration legislation before the August recess, which both sides see as the deadline for action in this Congress.

“We’re At Greater Risk” Since Edward Snowden’s revelations about government surveillence, we know more about how the National Security Agency has been interpreting Section 215 of the Patriot Act and Section 702 of the Foreign Intelligence Surveillance Act. We’ve learned some new words —“bulk metadata,” “selector,” “reasonable articulable suspicion,” “emphatic-access restriction”—but we don’t really know how much of this works in practice. The intelligence community isn’t used to explaining itself in public, but over the past few months, with much prodding by Congress and the press, it has taken some small, tentative steps. Last week, I spent an hour with General Keith B. Alexander, who retired in March after eight years as the director of the N.S.A. The forces pushing for omnivorous data collection are larger than any one person, but General Alexander’s role has been significant. We met on Wednesday morning, in the conference room of a public-relations firm in the Flatiron District. He is a tall man with a firm handshake and steady eyes who speaks rapidly and directly. Jill Abramson Says New York Times Firinging ‘Hurt’ Won’t Get NYT Tattoo Removed

The recently dismissed executive editor also revealed in a commencement speech that Anita Hill was one of the first people to contact her after her public firing. Jill Abramson delivered an honest speech to Wake Forest’s 2014 graduating class Monday. In her first public appearance since she was, as she put it, “fired” by the New York Times last Wednesday, Abramson preached resilience to those now also uncertain of what they would be doing next. House GOP bill would roll back school lunch rules

House Republicans are proposing to let some schools opt out of healthier school lunch and breakfast programs if they are losing money. A GOP spending bill for agriculture and food programs released Monday would allow schools to apply for waivers if they have a net loss on school food programs for six months in a row. Championed by first lady Michelle Obama, the new standards have been phased in over the last two school years, with more changes coming in 2014. The rules set fat, calorie, sugar and sodium limits on foods in the lunch line and beyond.
Cheney: Obama Has “Demonstrated Repeatedly” That He Can Be Pushed Around FMR. VICE PRESIDENT DICK CHENEY: I think you’ve got to look beyond just that most immediate crisis. Obviously, we’ve got to deal with that. But there has developed over the years of the Obama administration, I think, a sense on the part of others that we have a weak government. We saw, for example, at the mere request from Putin, President Obama withdrew the plans for a missile defense program based in Poland and the Czech Republic. He’s demonstrated repeatedly, I think, that he, in fact, can be pushed around, if you will, by a — by the Putins. And I don’t think by — Mr. Putin has any hesitation at all, from the standpoint of the American president, of changing his course of action. I think he’s taken advantage of this opportunity when he thinks we have a weak president to try to restore some of the old Soviet Union.

Secretary of State John Kerry warned graduates of Boston College on Monday that they have doom and destruction to look forward to if they don’t take climate change more seriously than previous generations. ‘And I know its hard to feel the urgency as we sit here on an absolutely beautiful morning in Boston,’ Kerry said, ‘you might not see climate change as an immediate threat to your job, your communities or your families.

GOP Leads in Midterm Races as Obamacare Drags Down Democrats

Republicans are in the lead in the most competitive House and Senate races for the 2014 midterm elections, a reflection of President Barack Obama’s low job approval rating and disenchantment with Obamacare, a new poll has found. In a poll by Politico conducted May 2-13 of 867 likely voters, 41 percent of respondents said they would choose a Republican compared to 34 percent who said they would choose a Democrat. Roughly 25 percent are unsure of their preference.